Some Book Review Requests I have Received From Self-Published Authors

One of the review requests is EDGE OF THE BREACH. The description of the book is below. I read the first chapter of this one and it is pretty bleak. The world set up is interesting, but I did feel like the author was trying to cram too much of it into the first chapter. I'm a explain it when I need it kind of writer. I wasn't a fan of the first lines. I found them more confusing than poetic, which I think is what the author was going for. I haven't decided if I'm going to review this one yet. A may need to read a little more first. Let me know in the comments if you agree or disagree.

We all become monsters at the edge of the breach. In a post-apocalyptic world where season of birth determines power — spring healers, summer mages, fall shapeshifters, and winter shields — a man and a woman emerge from tragic childhoods to lead humanity on opposite sides of an interrealm war. Julian Kyder is the son of an abusive rape victim who compensates for his abandonment through psychopathy. Sira Rune is a cancer survivor who dedicates her life to living free and fearless while experiencing the taboo and the unorthodox. While he struggles to control his demons and she struggles to find purpose, the gods drag the ruined world into war. Feel free to read excerpts on my website. 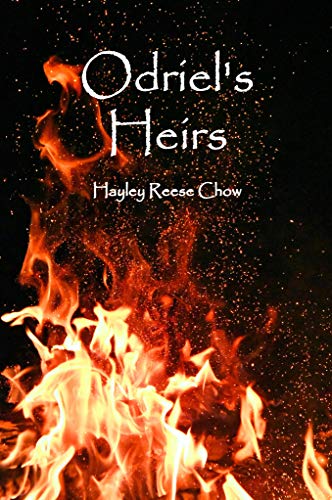 Here is the second book, Odriel's Heirs. This book is not released yet. I read the first chapter of this one, too. The chapter cuts out just before something finally starts to happen. What the author gave us is a lot of character introductions, maybe too many for a first chapter for some readers. I wish the author would have added a bit more of the chapter to help hook the reader. I haven't decided if I'm going to review this one yet either. Maybe because I read too much, neither of these books had anything about them that stood out in their first chapter. I've read all this before. I'm in the same boat with my own book. I worry about the trilogy I wrote being overdone or mundane, another book about the fay, no sparkle vampires to get readers in an uproar, nothing new about them. I'm still trying to figure out that secret sauce myself, that thing that makes your novel stand out. I know it when I read it, but I still can't define WHAT it is.

Here is the blurb for this novel below.

The brave, burning with fire, harnessed the Dragon's Rage....

As the Dragon Heir, seventeen-year-old Kaia inherited the power of flame to protect her homeland from a godlike necromancer’s undead army. But after centuries of peace, the necromancer has faded to myth, and the Dragon Heir is feared by the people. Persecuted and cast out, Kaia struggles to embrace and control her seemingly useless gift while confined to her family’s farm.

But when the necromancer’s undead terrorize the land once again, Kaia runs away to join the battle.

With the help of her childhood rival, the handsome Shadow Heir, and a snarky, cursed cat, Kaia must figure out how to control both her fire and her confidence in time to save Okarria. If she fails, she will sacrifice her family, her new friends, and the enchanting world she has only just begun to see.

And time is running out.
***
First chapter available here:
https://hayleyreesechow.com/odriels-heirs/

If you'd like to blast my book, too, because it's only fair. Here you go.