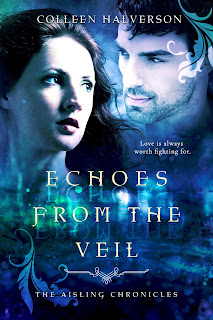 Genre: Paranormal Romance
Publisher: Entangled
Date of Publication: Feb. 24th 2020
Number of pages: 305
Word Count: 88K
Tagline: Love is Always Worth Fighting For
Book Description:
Aisling Elizabeth Tanner is now the leader of the Faerie rebellion. Facing the end of the world, she will have to find the strength to lead the Fae to victory against the threat they face, or risk losing everything, including Finn, whom she’s come to love more than life.
Warrior Finn O’Connell wants nothing more than to fight by Elizabeth’s side. But an ancient Celtic goddess threatens to take charge of his soul, and he will have to wage a war within himself to save the rebellion from disintegrating into chaos.
Betrayal leads them into the Fae Underworld, where Finn discovers his greatest sacrifice might be letting Elizabeth go—forever.

Amazon     BN     iBooks     Kobo     Entangled
Excerpt:
Finn turned on his heel and he practically tackled me against the bed, showering me with hard kisses on my lips, my neck, my chest. I dug my fingernails into his back, willing him to stay pinned to me. I lifted my hips, taking in his strength, his heat. I would have defied a thousand goddesses to keep Finn there, his body a shield against the cold creeping into the cave as night fell.
His arm slipped behind my neck as he shifted above me, nestling me in the hollow of his shoulder. “Let’s not think about it.”
I let out a long exhale, burying my nose in his chest. “I know. I can’t help it.”
“If the Morrígan comes for me, we shall deal with it then,” he said. “One battle at a time.”
I nodded.
He stretched and pulled me up from the bed. “You smell like Fir Bolgs.”
“I do not!” I made to punch him in the arm, but his quick reflexes had me spinning. He pinned my hands and pulled me against him.
“Fir Bolgs and horse,” he whispered in my ear. “Mmmm…so sexy…”
I elbowed him in the gut, and he grunted.
I marched away from him, my arms crossed against my naked chest. “And speaking of battles, don’t lecture in me in the middle of one again. I’m not your Padawan.”
Finn’s mocking grin turned to a grimace. “A what?”
“Star Wars?” I raised my eyebrows. “Jedi Apprentice?”
He blinked.
I rolled my eyes. “Just hand me the damn sponge so I can clean myself up.”
Finn frowned and walked over to the small tub we kept handy for bathing. He lifted the sponge out from the bath and squeezed it, his knuckles flexing as all the water ringed from it. His eyes lowered to the ground, and he walked over to me, clasping my hand in his.
“I’m sorry,” he said.
“For what?”
“For mansplaining, or whatever it is you call it.” He ran the sponge across my wrist, tiny rivulets of water and dirt falling down my arm. “You are not my Pad— Pa—”
“Padawan.”
“Right.” He ran the sponge across my shoulders, and a small moan escaped my lips as he applied slight pressure to my sore muscles. “I’m used to giving orders, not receiving them. And I…” He hesitated, his hand lingering on my waist.
“What?” I said in a soft voice.
“It’s hard for me to see you put yourself at risk. Like today with the wagon, and how you—”
“Finn,” I said in a warning tone.
“I know.” He ran the sponge down my back, my body trembling at the seductive motion.
“I don’t know if I’ll ever get used to it.” He planted a kiss between my shoulder blades.
I didn’t know if I would get used to it, either. The killing, the fighting. The first time I killed a Fir Bolg during a raid, I couldn’t eat for a week. My hands wouldn’t stop shaking. I still remembered the way my spear pierced his skin, how the blood had poured from the wound in his side. I’ve killed since then, but I would never stop thinking of that first one. Who was he? What was his name? Would someone mourn for him? But it had been either that Fir Bolg or me, and in this war, that was a fundamental truth I could not escape.
I turned to face Finn. He stood half naked, the edges and planes of his incredible body as chiseled and fine as a marble statue. I reached out to brush my hand against the small hairs on his pecs, tracing a line down to his emerging erection. He was insatiable lately, as if fucking me silly could somehow win this war. It was a constant undercurrent of our lovemaking. He accepted me as leader, but I knew he struggled with the risk, our mortality always one breath away from a stray bullet. Finn had one setting—protection. It didn’t matter if it was the Fianna soldiers he once led or me, his lover. Even then, I knew the unspoken truth of his heart, how he secretly wanted me safe in a tower, alone and waiting for him. But the rebellion would never wait, nor would liberty from the Fir Bolgs’ extremism. No one else could lead us to a real and equitable peace. As heir to Tír na nÓg, I was it. He had to get on the Xena-Warrior-Princess party wagon or find another girlfriend.
He reached for me, his eyes darkening. “I don’t know if I want to get used to it.”
I lifted my gaze to meet his smoldering stare. “I don’t think I can get used to your righteous BO, but I’m trying to make it work.”
“BO?”
“Body odor?” I waved my hand beneath my nose. “I’ll have to pick up some deodorant next time I’m mortal side.”
He cracked a wide smile and pulled me close to him. Before I could wrestle away, he lifted his armpit and put me in a headlock. “BO? That’s the smell of a fighter, princess!”
I squealed, falling in a fit of laughter as I tried to wrench myself away. I loved his smell. Sweaty, leathery, strong, and pure man.
“I can’t breathe!” I made pretend gagging noises. “Oh, god, get some soap, for the love of—”
He wrapped his arm around my waist and, seemingly defying the law of physics, flipped me into his arms, cradling me like a child. He rubbed his thumb down the side of my cheek, lingering on my bottom lip.
“I love you,” he said.
I arched an eyebrow. “Even though I stink?”
He nodded. “Especially because you stink. I love the smell of you. All of you. All of it.” He pressed his lips to mine, and I clutched his face with both hands, moaning as his tongue flicked against mine. 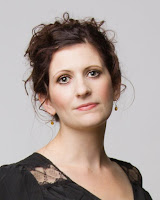 
As a child, Colleen Halverson used to play in the woods imagining worlds and telling stories to herself. Growing up on military bases, she found solace in her local library and later decided to make a living sharing the wonders of literature to poor, unsuspecting college freshmen. After backpacking through Ireland and singing in a traditional Irish music band, she earned a PhD in English with a specialization in Irish literature. When she’s not making up stories or teaching, she can be found hiking the rolling hills of the Driftless area of Wisconsin with her husband and two children. She also writes as C.B. Halverson. 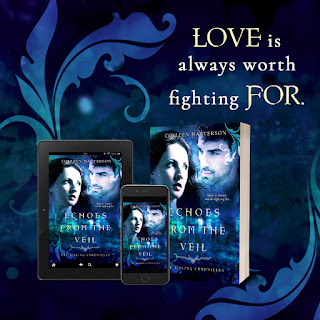