Welcome to the blog tour for Double Barrel Horror Volume #3, a collection of thrills and chills by six amazing authors! Hold onto your pants folks! 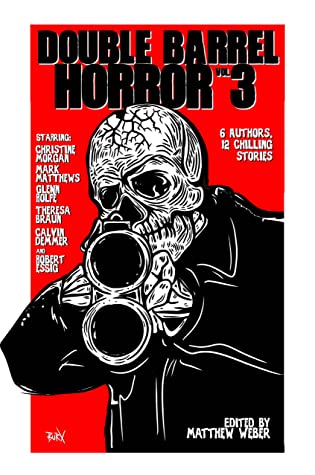 Double Barrel (Volume 3) Publication Date: March 22nd, 2020 Genre: Anthology/ Horror/ Suspense Brace yourself for another two-barrel blast of unrelenting horror and suspense. Volume 3 of the ‘Double Barrel Horror’ anthology series delivers two chilling tales from each of six talented authors for a 12-story onslaught that will blow you out of your sneakers. This time around, your fate lies in the hands of Christine Morgan, Mark Matthews, Theresa Braun, Calvin Demmer, Glenn Rolfe, and Robert Essig. Add to Goodreads

It couldn’t be alive?

Dudley Ellington couldn’t see the animal’s face, but based on the tufts of bloody fur, he thought it might be a rat or a squirrel. He stepped closer, and the creature’s legs shook as if it were attempting to kick-start its body back to life.

Dudley looked around, and all he saw was the long, empty stretch of highway. Why was there never a good stick lying around when you needed one? He tapped his boot on the animal, hoping for a response. He got nothing. Were his eyes playing tricks? He thought its legs moved a moment ago.

He tapped the animal again.

This time, one of its arms stretched out and then down, as if it were trying to push the button to answer a question on a game show. Dudley stepped back—not out of fear, as he assured himself, but to get a better view.

“Yo, Felipe. Come check this out.” Dudley ran his hand over his slicked-back hair. He looked to the white pickup when he got no reply from his coworker.

Felipe sat in the front seat with his orange helmet covering his eyes.

Felipe groaned, slowly pushing open the driver-side door. “What’s it now, Dud? I told you we can always take an extra thirty minutes for lunch. I was just about to get some rest. No one will give a shit.”

“There’s something on the road. I was gonna scoop it up, but it must be alive.”

Felipe’s eyes widened. He climbed out of the vehicle and marched to Dudley.

“Get back,” he said as he passed Dudley.

Dudley did as instructed, oddly reassured by the sudden authority in his coworker’s voice. Felipe would surely help the critter, maybe take it somewhere for injured animals. He was still new to the job and wasn’t sure of the correct protocol.

Felipe hovered over the creature. “It’s a squirrel. At least, it was. Half its body has been smashed.”

“Yeah, it’s a bummer for sure. But there’s nothing we can do. Best leave it be and let it die in peace.”

“That’s right. We leave it. It’s not dead, and we only collect the dead.”

Dudley stepped forward. “What about the injured animals? Where do you take them?”

“Injured animals.” Felipe scoffed, staring at the road. “Dud. Now isn’t the time for this. Let it go.”

The squirrel twitched, and Dudley imagined it hearing them talk about how they would simply desert it. That was nonsense, of course, as squirrels couldn’t understand humans, but still, he couldn’t allow it to suffer. He would have to put it out of its misery.

Dudley raised his boot, telling himself this was the most merciful thing he could do.

“No!” Felipe shouted, tackling him to the ground.

“What the fuck, man?” Dudley pushed Felipe off before getting to his feet and dusting his pants, not sure how much good it would do as they already had a stain or two from the takeaway burger he’d devoured for lunch. “Why would—”

“Dud. You need to listen to me.” Felipe glanced around. “We need to get going. I can explain everything once we’re on the move.”