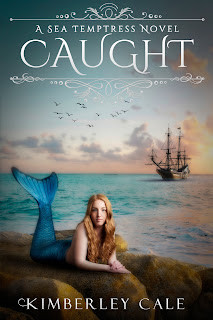 Caught
Sea Temptress Series
Book One
Kimberley Cale
Genre: Fantasy romance
ISBN: 978-1-7772821-0-3
ASIN: B08D7T8YSK
Number of pages: 155
Word Count: 58127
Cover Artist: Sharko Studios cover model Taylor Walker
Tagline: She was just supposed to be a myth. He was just supposed to be a stupid pirate. Who knew?
Book Description:
A vengeful pirate…
Ruthless pirate captain Quinn O’Connor is bent on getting revenge on the creatures who wrecked his ship and killed his crew. When he claims their leader as his captive, he doesn’t expect the scorching consequences that come with being stranded with her on a mysterious island.
A beautiful sea temptress…
Lorelei, a daughter of Poseidon, is willing to bargain with the dangerous pirate who captured her in order to save the ones she loves. He believes the worst of her and her kind, and when he drags her onto dry land, turning her beautiful tail into a pair of unsteady legs, she’s not sure if she’ll be able to return home—and soon she starts to wonder if she really wants to.
Magic and mayhem bring them together…
With each smoldering kiss, each heated touch, their desire blazes higher. Can they overcome misunderstandings and monstrous enemies seeking to tear them apart? Will a mermaid challenge her fate for the love of a pirate? Will the vengeful pirate give up his revenge and take on a god to save his mermaid?

Hello, Roxnne and all who are visiting. I’m Kimberley Cale, fantasy romance author of Caught, book one of the Sea Temptress Series. It’s great to be a guest here today. Thank you so much Roxanne for kindly inviting me to be here at Dark Whimsical Art.

Today, because my novel Caught contains sirens I want to review the horror movies that focus on sea creatures. Not all are horror movies but they do have a darker edge to them.
Below are the five movies I’ve seen:
The Shape of Water: While this is not a horror film, it does have a definite otherworldly eerie and atmospheric feel that grabs you from the start. There was a lot to love about this Guillermo del Toro film, set in the early 60’s. The real villain of the movie played by Michael Shannon clawed into his victims not with fang or talons but with the total abuse of his power. He was brutal, a villain I loved to hate and made the movie that much more. An eerie fairytale wrapped around an unusual and unexpected love story.
Ondine: Again this movie while full of dark whimsy Ondine would not be considered a horror story.mystery It’s more a mystery/love story with an edge Ondine teases with the fairytale premise of the selkies while dealing with the harsh realities of alcoholism, drug trafficking, a broken home, poverty and illness.
Cold Skin: I loved the hauntingly beautiful scenes of Cold Skin. This I would define as a classic hide behind your pillow horror film. The coastal isolation added so much to this film. It hit the fright factor mark for me, but I kept waiting for the antagonism between the two main characters to come to a head and in this the film fell short for me. I still enjoyed the movie. I loved the mystery of the sea creatures. It felt a little like The Shape of Water with the affection growing between the lead and one of the sea creatures and the fact that we discover early on who the real monster of the movie is.
Mermaid Down: I wanted to find an actual mermaid horror movie to throw into the mix so I watched this one. I liked the idea of a mermaid wronged by fishermen and who was looking for revenge. After getting her tail chopped off, she finds herself in a mental institution for women with no one believing she’s mermaid. Sadly the show dragged too much for me and as far as a horror movie…not so much. I did not find this at all scary just slow. On the up side the ending was quite gratifying.
Siren (2016): There are a couple of movies named Siren. I picked this one because it checked off most of the siren boxes I visualize when I think of sirens and as sirens are one group of antagonist my hero and heroine must confront in my novel Caught, I thought this movie best represented them. Men lured in by a pretty face, check. Siren song used to enchant, check. Something spinster lurking beneath, check, check, check. The only difference is this siren comes not from the depths of the ocean but from the bowels of hell.

Those are the movies I’ve seen but there are others I haven’t that looked promising like The Lure and Blue My Mind which looked like they might be worth a look.
Best regards
Kimberley Cale 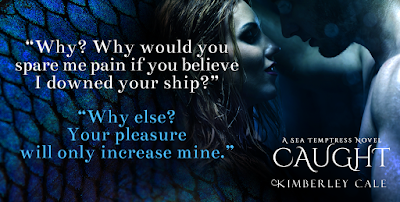 Excerpt One for Caught
He’d make her pay. He vowed it. Quinn sat with his unconscious prey in the only remaining rowboat. With red-rimmed eyes, he watched as his ship, his pride and joy, The Mayhem, was consumed by fire. Yellow and orange flames blazed, creating a distorted tale of fiery devastation on the dark waters, while billowing black smoke overshadowed the star-studded sky above.
He would not look away, not from the sweltering heat of the flames, nor from the acrid stench of burning oiled wood and sail. Not even the vile smell of human flesh set afire could make him avert his gaze. He wanted to imprint this sight into his brain, so when he was ready to punish the murderous little creature he had captured and plucked from the sea, he would not falter. He would remember and take measure for measure.
He stared at her now, and hatred raged in his heart. Her face, so deceptively innocent, did not fool him. Relentlessly, he rowed towards the little island not far off while his thoughts churned on the treachery of women.
Having once been played the fool by a pretty face in his checkered past, he’d learnt a thing or two about women and their self-serving ways. He’d almost paid the price by getting leg shackled to one until he’d discovered the true extent of her devious nature.
Fortunately, he’d found her out before she’d been able to cause too much damage.
The one taking up space in his rowboat had scuttled his ship and succeeded in sending his crew on a one-way journey to Davy Jones’s Locker.
It gutted him to think of their lifeless bodies drifting down into a watery grave while their murderer sat across from him, alive and well.
Quinn collapsed back into the bow of the rowboat. His weary mind drifted back to before the mermaid had invaded his life. Memories took on a dreamlike quality, taking him back to just before this nightmare started, as if the events were occurring for the first time. 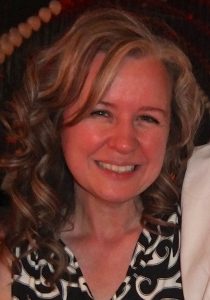 About the Author:
Kimberley Cale writes fantasy romance and is the author of the Sea Temptress Series and the epic Tales of Terraron. She has been a reading addict for as long as she can remember. While she enjoys reading anything and everything from historical, paranormal to contemporary novels, she has found her passion bringing her feisty heroines together with their bad boy heroes and adding a spark of magic to create fantastic page turning romance.
After visiting over half of the United States, Mexico, The Dominican, Europe and parts of Canada, she can honestly say the experience has broadened her perspective on other cultures and enlivened her already overactive imagination.
Her family will tell you that from the time she was a child she has rarely been without a journal in hand building worlds for her characters to live in and exciting obsoletes for them to overcome.
With a few college and online writing courses under her belt, Kimberley is constantly learning how to improve her writing craft online, While she worked for an insurance company, part of her job involved writing letters to claimants. These were sad tales that should have started with sorry for your loss. Later she worked in the safety industry and wrote many a safety manual for different companies. Unfortunately not one manual included an ounce of romance in it. Finally after years of research, which involved reading a great variety of romance novels well into the night, she decided to pursue her writing passion.
Kimberley’s other loves besides her awesome family include, trying unsuccessfully to keep the weeds out of her garden. So far verbal threats and hand gestures haven’t worked; still it’s a war she intends to win. She’s also obsessed with a streaming cup of hot chocolate; well chocolate of any kind really, there’s been talk amongst family and friends about an intervention. When she’s not writing you will find her snuggled next to her hubby searching Netflix for the latest epic movies.
More than anything else she loves hearing from her readers and makes it a priority to respond to any and all who are willing to take the time to send her a line.
Website www.kimberleycale.com

September 2 Momma Says: To Read or Not to Read
http://mommasaystoreadornottoread.blogspot.com/