Aug 27 Book Tour: The Witch with Nine Lives A Dysfunctional Family of Witches Book One B. Austin 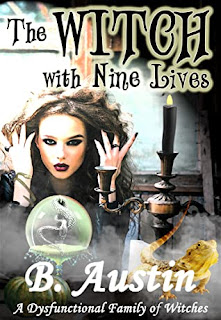 The Witch with Nine Lives
A Dysfunctional Family of Witches
Book One
B. Austin
Genre: Paranormal, Urban, YA, Horror
Publisher: Spellbound Books
Date of Publication: 8/27/2020
ASIN: B08BHSJ2RW
Number of pages: 263
Word Count: 58,319
Cover Artist: B. Austin
Tagline: The Tie Between Two Powerful Sisters is Tested when Secrets, Lies and Magic is Revealed in a Dysfunctional Family of Witches.
Book Description:
Medea turns into a cat at night, due to her mother's curse. Her mother, Dima, has a shapeshifting stone. She is 130-years-old but appears to be 18, nearly the same age as her two daughters.
Nikki works as a maid, rather than in the family witchcraft business of fortune-telling, seances, and other witchery-for-hire. She was born a Marilyn-Monroe lookalike. Despite her beauty, jealousy eats away at Nikki because her mother and sister have magic. Nor is Nikki allowed near the books of spells, enchantments, and potions Dima stole from Russian monks.
Medea is tortured by a secret that can destroy the sisterly tie between her and Nikki.
Unknown to her family, Nikki, is developing a magical gift which she cannot control, a sorcery that will threaten Medea and pit two powerful sisters against each other.

The Witch with Nine Lives
A Dysfunctional Family of Witches Excerpt
PROLOGUE
Nikki held her dead sister in her arms, a cat named Medea. It was only because of her youngest daughter, well now her only daughter, that their mother attended this makeshift funeral. Dima should be working. Luke Air Force Base in Glendale was open. There was money to be made dancing with solders. Most paid good money for Dima to gaze into a crystal ball and tell the men their futures.
Bah, this is a waste of my time, having a funeral for Medea. Dima frowned at the dead Abyssinian cat. The different-colored eyes were glazed over in death and the tongue was hanging out. Dima turned her head away. She felt guilty for having cast a spell on her oldest daughter to begin with. It was for her own good. She may have been just a teenager, but the mafia wanted her dead.
Almost 24 hours passed since Nikki found Medea dead in the backyard. The girl had run into the house screaming, carrying her dead sister in her arms, the cat’s arms dangling and the head hanging. The eyes were open and still. Nikki had been hysterical until Dima slapped her.
Once more, Nikki cried over her furry sister. The girl seemed to like her sister more now that Medea was dead.
Dima yanked a shapeshifting stone from her pocket. She ordered the stone to shapeshift into a shovel. She then dug a small grave.
Nikki gently placed her sister in the small, shallow grave.
The emotional upset of seeing her eldest daughter lying dead with a pile of dirt beside the open grave, caused Dima to transform from a sexy, 18-year-old to her true self, a 130-year-old hag. Quick, she grabbed the shovel which then melted into her hands and reformed as the shapeshifting stone. She clutched the stone and spun until she was once more an 18-year-old beauty.
It was almost midnight at the small, private Russian Molokan Cemetery located at 75th and Maryland Avenue in Glendale, Arizona. There was a full moon, so there was plenty of light shining on the grave.
“Why couldn’t we have a coffin?” Nikki again asked.
“Your sister always liked the dirt. Remember how she would dig with her claws?” Dima said.
“Yes, but that was so she could use the bathroom outside,” Nikki pointed out.
“Well, you really shouldn’t cry over a sister who used her tongue as toilet paper,” Dima said. “Medea was inferior.”
Nikki glared at her. “Medea was a cat because of you.”
“Well, if Medea had not been an outdoor cat, but stayed indoors, she might have lived a few years longer, if not for you,” Dima said.
Now, it was Nikki’s turn to look guilty.
The moon moved directly above them, signaling that it was now midnight.
Dima screeched and pointed at the grave. Moonlight was shining on the cat, which had transformed from a brown Abyssinian cat into a black kitten.
“Medea’s come back to life!” Nikki clapped her hands with joy.
Dima, on the other hand, was so shocked that she dropped Pompeii, her shapeshifting stone. She again transformed from a young woman to an ancient one. Her boobs were sagging past her waist. Her hair was but a few sparse white hairs. Dima lifted her head so that she could see because her wrinkly eyelids blurred her vision, not to mention the cataracts; oh, the cataracts, and the arthritis in her gnarled hands. Her back was hunched over. Dima ached with more than a century and a quarter of living, and none of it as the granddaughter of Catherine the Great of Russia. Dima was born with signs that she would be a witch, which freaked out her royal family, so her bastard mother threw her away.
Well, enough of bad memories. Medea was reborn!
The kitten sat up and stretched, arching its back. She wasn’t exactly a newborn kitten. Medea appeared to be the size of a four-month-old kitten.
Dima stooped to pick up the shapeshifting stone.
The kitten was faster and jumped on the stone, sitting on the rock.
Dima jumped out of the way because the kitten scratched at her ankles.
Dima growled low in her throat. “I see dying hasn’t improved your bad manners, Medea. You are still headstrong though you must weigh all of three pounds. Move, or I’ll smack you with a newspaper.”
Seventeen cats, some old, some young, surrounded them, hissing at Dima. Of course, the cats attended Medea’s funeral. She was their leader.
Traitors, Dima thought. The older cats had once been loyal to her, but that was before she turned her daughter into a cat.
Dima took a step back. Medea may have been reborn as a black cat, but her eyes were still the same, one eye being amber in color and the other eye emerald-green. The two different colors were a sign of magic. Medea was still a witch and power still flowed in her kitty veins.
The kitten laughed. “Come now, mother,” Medea said in a kittenish, human voice. Medea apparently had the memories of her past life. “It won’t hurt you to stay your own age, for an hour or so. This is my wish for my birthday.”
“You don’t get a second birthday,” Dima snarled.
“Yes, she does,” Nikki protested. “Medea has now been born twice.” 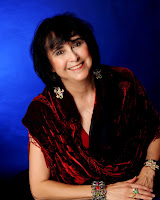 About the Author:
Belinda has fun creating both researched and original magic in her books. She grew up in New Mexico, a Southwestern state known as the Land of Enchantment with a long history of Native American and Spanish witchcraft. Growing up, she heard spell-binding tales about magic and real witches, magic sometimes witnessed by family members. Belinda has a friend in Albuquerque who is a modern-day witch. Belinda is a former Software Engineer / Web Applications Developer. She has a degree in Applied Mathematics. She did not have to do research when it comes to dysfunctional families. Her father was a bigamist with two wives and two sets of children.
Newsletter sign up http://eepurl.com/bk8KZP
Web http://www.authorBelinda.com
Twitter http://twitter.com/MagicProse
Facebook https://www.facebook.com/AuthorBAustin/
Bookbub https://www.bookbub.com/authors/b-austin 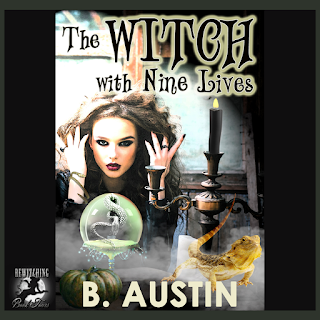 August 27 Momma Says: To Read or Not to Read
http://mommasaystoreadornottoread.blogspot.com/