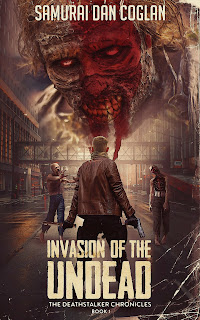 Invasion of the Undead
Death Stalker Chronicles
Book One
Samurai Dan Coglan
Genre: Horror
Publisher: L’Oste Vineyard Press
Date of Publication: 5-28-2021
ISBN: 978-1-7353896-7-7
ASIN: B08XNS92W5
Number of pages: 242
Word Count: 60500
Book Description:
Former Marine Lance Corporal Chase Brooks fought the enemy in Afghanistan and lost his unit.
Now back in America, he fights to keep from losing his mind, as he is repeatedly attacked by the undead that he believes wiped out his men overseas.
Convinced that what he saw over there was real, he goes to war to wipe out the undead on American soil.
#samuaraidancoglanbooks #invasionoftheundead #deathstalkerchronicles #lostevineyardpress #horror #zombies #horrorbook #zombiebook
L’Oste Vineyard Press     Amazon     BookShop

“Get those damn charges set, and let’s get out of here,” I growled into my mic.  Shadows moved around me, and a turbaned face appeared out of the murky darkness.  I shot the onrushing insurgent twice and looked around for more.

“Come on, come on, come on,” I muttered.  “We’re past time for evac.  Move your slow asses!” Lt. Rodriquez was suddenly at my side, scowling.  “We’re doing the best we can, Corporal.  Hold on to your hat.”

“Charges set, Lieutenant,” Stevens called out.  “That makes all four; we can blow this popsicle stand!”

“About damn time,” I snapped.  “There are hostiles everywhere.  What the hell is this place, anyway?”

McGavin scoffed.  “It’s a temple, Brooks.  Remember? We had a briefing and everything.”

“Screw you,” I told him.  “This ain’t like no temple that I’ve ever seen.  And it smells like a fucking crypt.”

“No lie,” my buddy, Lance Corporal Jeremy Stevens, chimed in.

I led us back out, the six of us in tight formation.  Stevens was on my left flank; Sgt. Bates was on my right, and the Lieutenant was in the middle with the beady-eyed “guide” that the Colonel had stuck us with.  McGavin brought up the rear.

Dead bodies were everywhere; our ingress had come with a high body count.  I ignored them.

Two tours had made me immune to corpses. I had bigger priorities.

There was a commotion in front of us; heard but not seen.  Voices cried out in excitement.  We froze.

Our position was suddenly hit with massive spotlights.  “We’ve been cut off! Break left!” Rodriquez yelled as gunfire erupted all around us.  We returned fire, hot and heavy.
Being in front has its disadvantages.  I got hit three times, twice in the chest and once in the leg.

My vest took the brunt of the two to the chest, but the leg shot really sucked.  I went down but staggered back to my feet and kept fighting.

Stevens took over point; Lt. Rodriquez slid over to his spot and put me in the middle with the guide, who looked scared out of his mind.  I didn’t blame him.

We raced through the gloom, moving downhill but not having a choice in the matter.  McGavin took a round to the lower back and went down.  I shouted, and the unit took up positions around our fallen comrade.

We created a semi-circle facing back the way we’d come, weapons up and ready.  There wasn’t long to wait.  The horde was on us quickly, the heavy sound of their AK-47s threatening to overwhelm the sharper cracks of our M-4s.

It was over in less than sixty seconds, and to my amazement, we were still standing.  There were bodies all around us, and the air was thick with the smell of cordite.  Clouds of smoke from the gunfire obscured our lights even further.
It was like being in hell, I thought, sweeping the area with my carbine.  Something flashed in my light, and I swung back.

There was a figure standing at the edge of the light.  It couldn’t be a friendly, so I shot at it.  I missed, and it ducked behind a pile of bodies.  The Lieutenant motioned, and Stevens and I went out to get whoever it was.

I’d taken maybe three steps when the figure reappeared, much closer.  I could tell it was a man, head and neck wrapped in a shemagh.  One arm was holding a bundle, and the other was outstretched toward the ceiling.

His eyes were glowing red.  I blinked.  His eyes really were glowing; it wasn’t goggles or an optical illusion.  Glowing or not, I knew what my job was.  I put that head with glowing eyes in my sights and prepared to pull the trigger.

Our guide, who’d been useless and paranoid the entire mission, started screaming and babbling in complete gibberish.  The only part that I could make out was something about Manziel or manzazu or some such nonsense, but his outburst caught me off guard, and I missed my shot.
Suddenly there was movement all around us.  The bodies of the enemy combatants were stirring.  Impossibly, they were staggering to their feet.  All around us, corpses were rising from the floor, their eyes shining a baleful crimson.

“What the fuck?” Stevens shouted.  “This ain’t happening, man.”

I put a three-round burst into the chest of the corpse nearest me and blew out his heart.  It didn’t seem to affect him at all; he just kept shuffling toward me, his arms reaching out.  I shot him again, this time doing the Mozambique technique that had been drilled into all Marines.  The two shots to the body didn’t do anything, but the follow-up round to the head dropped it.
I could hear my unit screaming, cursing, and shooting the reanimated dead bodies all around me.

They were coming at us from every direction.

We tightened our circle, trying to cover each other as we changed mags and shifted targets.  It didn’t matter; they overwhelmed us. There were just too many of them, and we couldn’t put them down fast enough.

I watched in horror as my best friend, Jeremy Stevens, was pulled down by a mob of freaking zombies and torn apart.  Behind me, Lt. Rodriquez screamed, and then his voice trailed off into a muffled gurgle, and I knew he was gone, too.

My mag ran dry, and I reached for another, determined to keep fighting.  My fingers closed on air.  I was out.  The undead pressed in, their hands clawing for me.  I swung the empty rifle like a club, trying to clear a space.

The undead mob pulled the rifle from my hands, so I drew my Colt 1911 handgun.  It was a fine weapon, and I was good with it, but it only held eight rounds.  Those eight rounds went quickly.

When the pistol was empty, all sounds of gunfire ceased.

I was the last of the unit standing.  The zombies surrounded me.  To my right, two of the obscene things were eating my Sergeant.  Behind them, more were tearing our guide to pieces.
I spun to my left and saw what was left of Stevens.  Hands fastened onto my vest, and I twisted away.  More grabbed hold of my legs, and I went down.

The zombies crowded around me.  Behind them, looking on, was the man with the glowing eyes, triumph on his face.  He cackled with glee.

In desperation, I felt around for anything to use as a weapon.  My hands reached above my head and found the remains of the Lieutenant.  His head had been ripped off.  My hands shifted lower and found the detonator on his belt for the explosive packages that we’d set.

I yanked it free and held it up.  The zombies were all over me, and their leader was looking down at me, sneering.

“Fuck you,” I screamed and pushed the button.  There was a distant rumble, a pressure wave, and then the world collapsed on me.

About the Author:
Dan Coglan, A.K.A. “Samurai Dan” is the acknowledged masters of marital… er, martial mayhem.  Dan travels the civilized portions of the U.S., bringing his unique show to curious and horrified audiences alike.
In addition to their high-energy, mostly safe stage shows (where razor-sharp blades and barbs fly),  Dan teaches historical and hysterical panels on the way of the warrior.  Offering a wide range of lectures and interactive workshops, Dan provides joy and laughs wherever he goes.
Due to a supreme lack of filter, Dan also performs standup comedy in censored and uncensored settings.  A storyteller at heart, Dan is releasing his first book in his Deathstalker Chronicle Series:  Invasion of the Undead.
Twitter: https://twitter.com/CoglanDan
Website: http://lostevineyardpress.com/samurai-dan/
Sign Up for Newsletter http://eepurl.com/g7BHg1
Instagram: https://www.instagram.com/samuraidancoglanbooks/
Facebook: https://www.facebook.com/Samurai-Dan-Coglan-Books-104044338407277
Goodreads: https://www.goodreads.com/user/show/131038662-samurai-dan-coglan 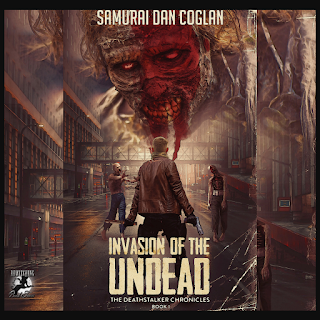 May 7 The Avid Reader (Review)
https://the-avidreader.blogspot.com/

May 14 Momma Says: To Read or Not to Read
http://mommasaystoreadornottoread.blogspot.com/

May 17 Lisa’s World of Books
http://www.lisasworldofbooks.net/